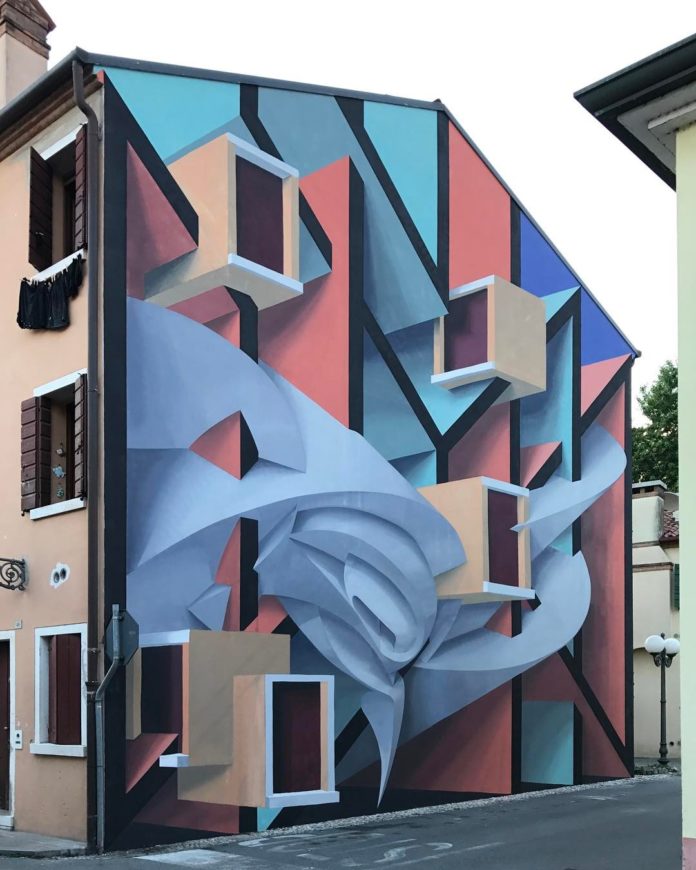 In my pictorial, sculptural and mural compositions, my geometrical shapes act as they interact with the surrounding environment. In particular, when painting on walls, my aim is always to create a dialogue, with the structural and cultural parameters of the surrounding context, either architectural or not.

Initially, my works only realized the sculptural quality of individual letters, namely the ones that spelled out my own moniker, Peeta. Progressively, the fusion between traditional lettering and three dimensional style has given life to a unique kind of visual rhythm. Today, through my anamorphic works I redesign the volumes of any kind of surface involved, thus causing with my paintings a “temporary interruption of normality” by altering the perception of familiar contexts and so raising a different understanding of spaces and, consequently, of reality on a whole.

Metaphorically, I want to neutralize preconceptions and urge the emergence of new perspectives. Anamorphism totally embodies the intent, always pivotal in my production, to reveal the deceptiveness of human perception, the fallacy of narrow and fixed points of view through visual tricks which, proceeding from the attempt to confer a three-dimensional semblance on a pictorial representation, ultimately reveal their will to deceive.

Due to my turn towards anamorphic painting, I choose to transform also my traditional shapes in order to let them interplay with standard modules of architectonic structures, often changing them from irregular and smooth to geometrical solids.

Constantly running in parallel with my mural and painting activity, the role of sculpture comes to be essential for my overall production as it represents for me a direct contact with three-dimensionality in order to understand the rules of light and shadows and to reproduce them.